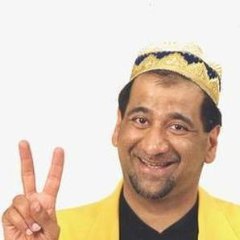 Special comedy night at Usurp – the only preview in London before his Edinburgh Festival tour! Book now for EMMA award winning Muslim comic, Jeff Mirza’s hilarious jihadi fuelled ‘faith off’ about world beliefs fresh from a tour of Saudi Arabia.

“Heresy Or Hearsay?” is Jeff Mirza’s paradoxical story of a Muslim boy’s journey from the East End of London as an Architect, Stand up Comedian and Actor with a unique and daring assault on preconceptions and cultural stereotypes.

Prophets or losses? Blasphemy or Blast-for-me? Do beards really matter? Why was JK Rowling being discussed at the local Mosque? Nectar Points or Clubcards: which is halal? Are Gay Muslims allowed? Can cousin marriages, burqas, consumption of meat, inquisitions and crusades really help one get to heaven? Allah, Buddha, Christ, Dawkins, or Darwin – none are spared. Just don’t shoot the messenger! Jews and Hindus welcome. Ramadan Mubarak!

Award winning and infamous, Jeff Mirza has performed all over the world, and is the first British comedian ever to perform stand up comedy to sell out shows in Saudi Arabia. Jeff began his comedy career as a finalist in the BBC Open Mic awards and at Edinburgh in the mid 1990s, is regularly involved with interfaith dialogue between different communities and often called in to lighten-up and moderate contentious debates between multi-faith conservatives. TV appearances include BBC’s Chuckle Vision, Murder in Mind and Doctors, Channel 4’s ‘White Teeth.’ Films include ‘Bend it Like Beckham, Bigga than Ben, ‘Mad, Sad and Bad’ and a Bollywood movie currently in production called ‘Desi Boyz.’ Jeff took home an EMMA award for his comedy and recently presented the World’s first interfaith game show called ‘Faith Off’ on the Islam Channel. This show will be at The Edinburgh Festival at Underbelly, Cowgate, Edinburgh throughout 4 to 28 August 2011.