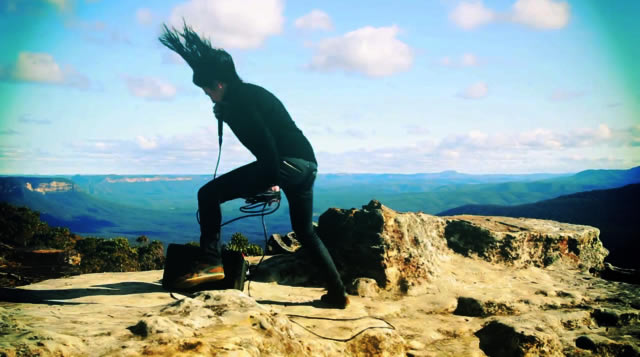 Kusum Normoyle is an artist and musician working in the area of extended vocal techniques and noise for both performance and installation. Central to her practice is the idea of public space, intervention and displacing normal expectations of female body and voice. Performing brief high intensity vocal incursions which are extreme and physical. The female scream takes a much heavier tone; more like metal than hysteria, dragging the audience into a harder, faster display of screaming, amplification and feedback. This work presents a politics of sound in public space, aiming to evoke the desire to disrupt, to listen and to engage.

Screening new video and audio work produced in Ljubljana, Bosnia/Herzegovina and Croatia. These works are incursions specific to the site of the Spomenik (literally monuments) within these regions, built in the 60’s and 70’s to commemorate communist rule, POW’s and site of conflict in the former Yugoslavia. Deeply intriguing visually and steeped in a futurist beauty, these monuments also propose an immensely tragic history of events. The multiple conflicts linked and presented by the solo scream at these sites draws on a politics of memory and a melancholy for the present, sonically tearing into the environment whilst reflecting on a history now seemingly distant. This scream, amplified and abstracted is here reminiscent of capacity of the individual voice – in this case supported by modernist instrument for public address – (PA) system.

Steve Beresford: “Beresford was alert and intent behind an array of table-top gizmos which, to the uninitiated, could have been taken for hopeful offerings at an electronics fair! He was the operator supremo, hands darting back and forth, reaching over to hit the right devices, fingers working what was effectively a massive, unconventional keyboard to extract clatterings, chatterings, skewed sounds and waves – supplemented by sirens and honks, with the odd hand held noise-maker whirring above his head” London Jazz 2011.

Alan Tomlinson – tenor and alto trombones: “A trombonist who manages to be simultaneously the best & the funniest you have ever seen” The Vortex Jazz Club. Since the 1980’s, Alan has been active in the European improvised music scene, with broadcast festivals & recordings. He has worked professionally in all areas of music & was a long time member of Barry Guy’s London Jazz Composers Orchestra. Works with his own trio with Dave Tucker and Phil Marks, with a trio in Berlin & a duo with the Romanian poet Virgil Mihaiu. As a member of the contemporary music ensembles London New Wind Ensemble and Sounds Positive he has given several first performances of solo pieces written for him. Some recent solos have been with a Glass Trombone, a fish & chip van on it’s round and in the River Seven.

” Alan Tomlinson stormed away with the whole show” The Wire. ” A performer of uncanny precision, with apparently unlimited sound effects played brilliantly” John Fordham, The Guardian.

Disinformation: Jean Genet: Rorschach Audio: Death Music: What is the connection between the works of French burglar and prostitute Jean Genet and of the 19th century Swiss crystallographer Louis Albert Necker? As an articulation of Jean Paul Sartre’s discourse on Genet’s embodiment of “the negative”, Disinformation remixes audio samples from the final interview with one of modern France’s most notorious writers, exploring perceptual ambiguities which link experiences of auditory and visual illusions.

“There must have been certain forces in my unconscious (complexes, childhood memories, desires, etc) which produced this association so regularly… it is because death must live within me… it springs forth from my slightest word” Jean Genet.

Disinformation is an electronic music and installation art project best known for intense and dramatic work with light, noise and raw electrical energy, and for research projects concerned with psychology of audio illusions. The Metro described Disinformation’s work as “stunning”, The Wire described this work as “fascinating”, The Financial Times described Disinformation as “actively thrilling”. This performance is presented as part of the AHRC funded “Rorschach Audio” research project, hosted by The Institute of Modern and Contemporary Culture at The University of Westminster.