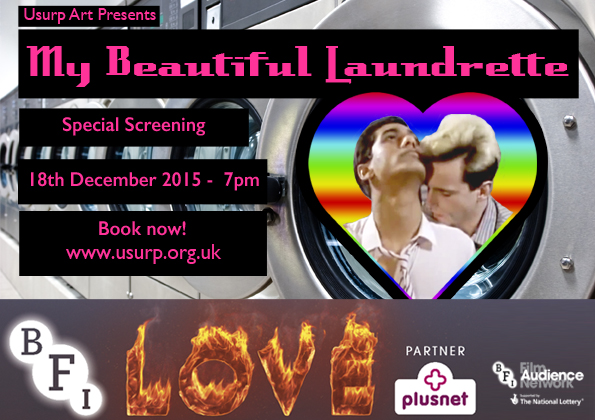 Usurp is delighted to be part of the BFI Love season. We are hosting a special 30th anniversary screening of  the beautifully, transgressive film ‘My Beautiful Laundrette’ written by Hanif Kureishi and directed by Stephen Frears. Expect a night of love, poignant nostalgia and boisterous politics about we do now and in the future, with drinks and snacks provided. We are also screening a vignette interview filmed in 1988 in Mumbai with Saeed Jaffrey, a tribute to the great actor, who sadly passed away recently.

All tickets sold out!

“Whereas it took a cluster of “kitchen sink” dramas to enfranchise the northern working class in the British cinema of the early 1960s, a single subversive movie did it for the Anglo-Asian community in the 1980s. My Beautiful Laundrette, written by Hanif Kureishi and directed by Stephen Frears, threw a Molotov cocktail of urban chaos, polemical ire, spiky comedy, and mixed-race queer sex into the so-called British Film Renaissance of 1984–86…Frears and Kureishi’s pungently written, grittily lyrical comedy-drama front-loads the refurbishment and reopening of a run-down washateria in a South London Asian community to explore how Margaret Thatcher’s enterprise culture fostered greed even as it created jobs (though not enough to keep pace with the unemployment caused by Thatcherism’s dismantling of heavy industries). This issue is filtered through the working relationship of the laundrette’s second-generation Anglo-Pakistani manager, Omar Ali (Gordon Warnecke), and Johnny Burfoot (Daniel Day-Lewis), his white, working-class jack-of-all-trades and lover.” ‘My Beautiful Laundrette: Postcolonialism in the Wash’ by Graham Fuller. Full essay: https://www.criterion.com/current/posts/3634-my-beautiful-laundrette-postcolonialism-in-the-wash

Usurp Art is part of Film Hub London, managed by Film London and proud to be a partner of the BFI Film Audience Network and a BFI Neighbourhood cinema.  bfi.org.uk/love

Here are some quotes, photos and  a short video.

“Seeing this film again reminded me of what an impact it had had on my life at a time in 1985 when I was still coming to terms with my own sexuality. Thank you for screening this at Usurp, the effort you all put in with the food and festivities, and making this night a night to remember.” David, audience member.

“It was great to see this film for the first time; I was very young when it was released and to think about all the issues that were going on then and now. I really enjoyed the Saeed Jaffrey film and the post film discussions. Thank you for making this a very special night and thank you for the warm welcome with the food and drinks.” Asha, audience member.

“Thank you Usurp for making this such a memorable night. It is great to be able to have this in West Harrow as there is nothing else like this here to come to, please do some more!” Manisha, audience member.

As well screening “My Beautiful Laundrette” to a packed house, we screened a special vignette interview with Saeed Jaffrey, made by Simon Underwood and Clementine Deliss in 1990 in Mumbai (Bombay as it was known then). View it here:

Thanks to BFI LOVE, in partnership with Plusnet, BFI FIlm Audience Network, Cinema For All.