On the eve of Bloomsday, Usurp Art hosted an intimate evening of Waywords and Meansigns performances, featuring live music and readings based on Joyce’s bizarre novel, “Finnegans Wake”.

The event was a great success, bringing together a wide range of artists and academics from music, spoken word, performance & beyond, and explored the possibilities of, the future of language, being, non-being, perception, listening and performativity.

MC for the night was Waywords & Meansigns project director, Derek Pyle, who navigated us through not only Joyce’s idiosyncratic text but the performers take on it.

The event was broadcast live on www.awdio.com you can listed to the audo below.

Video with excerpts from the event.

Video of  a free-improv set with audience participation that followed the evening.

Some pics from the night. 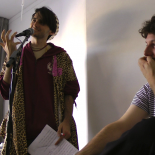 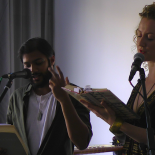 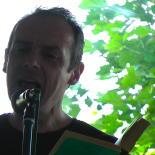 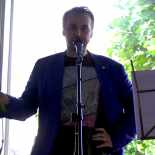 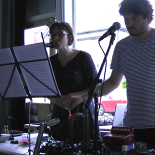 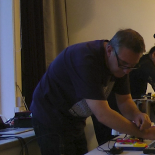 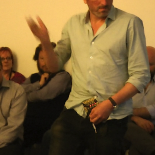 Running order of the night:

Bob Kesh  – A poet, novelist and musician from London. His work can be found on Kerosene Chronicle Literary Blog where he is co-founder, editor and a contributor. His poetry and short stories have recently been published in the Roehampton Writing Society Anthology. www.kerosenechronicle.com

Krzysztof Bartnicki is best known for translating Finnegans Wake into Polish, a project which took ten years and was subsequently published by “Ha! art as Finneganów tren”. Krzysztof also created two musical scores based on Joyce’s text, “Da Capo al Finne” and “Finnegans _ake”. Krzysztof is responsible for the book “Fu wojny”, which deals with issues of translation.  https://soundcloud.com/gimcbart

Ollie Evans is a poet and performer from London.  He recently finished a Phd on the “Performance of Finnegans Wake” at Birkbeck College, University of London. From 2008-2011 he made performances with his group, Dummy Company, which pursued a combination of puppetry, object theatre, sound-art, language games and experimental ventriloquism.

Neil Campbell has been active on the lunatic fringe of the UK’s underground music scene since at least 1979. A noted solo performer and a core member of groups such as Vibracathedral Orchestra, A Band and Astral Social Club.

“We always knew Finnegans Wake was really just a wild psychedelic concept album that got trapped in a book. Well, it’s been freed.”  Stew, the Negro Problem

“Waywords and Meansigns is one of the most meaty and brazen musical responses to a piece of literature I know of, in part for its vast scope but more so for the gravity of its subject: Joyce’s epically inscrutable Finnegans Wake.”  Chris Rael, Church of Betty and Araby composer

Featured in The Guardian:  http://www.theguardian.com/books/booksblog/2016/feb/02/finnegans-wake-music-james-joyce-birthday

Listen to the entire project here:  Waywords and Meansigns