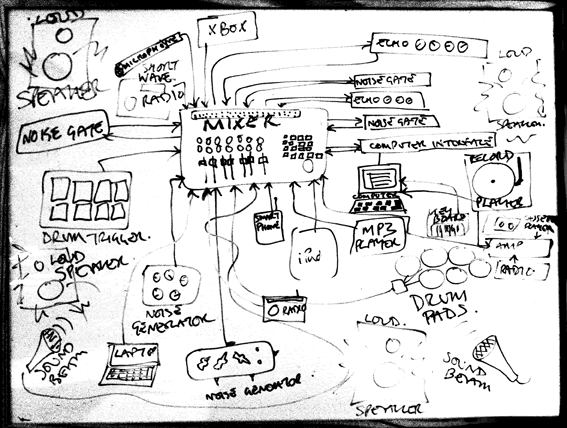 This exhibition explores the sonic thresholds that control reactions in other sounds and within our selves. The material is chosen by the artist or by the visitor, connecting their own phone, laptop or other device to the installation. With knobs to be tweaked, pads to be hit and by gestures gentle or giant, sounds react according to a volatile dynamic.

Our day has a complex soundtrack. Our ability to process sonic information reaches new thresholds, changing the way we use and perceive sound. A chorus of tones, distortions and dropouts accompany our conversations. Our music is eclectic, appropriated; stolen properly. Entertained or offended, breaking into a dance, a sweat, or a riot, under the influence or over the top, at which point does our behaviour change and how do we react to being pushed too far? When do we stop asking for more? Too little or too much defines our response.

In the late 1980′s alongside Orbital, The Shaman and The Irresistible Force, Paul Chivers, performed under the name of Ramjac at legendary Acid House parties Live Wire, Back to the Future, Energy, Sunrise, Humanity, Synergy, Fundamental and Spiral Tribe. The sound was captured on the 1990 album Live at the Brain and with cult record label Irdial Discs. Paul’s study with West African and Cuban drummers gave the music a flavour that lead Kodwo Eshun to call Ramjac “The funkiest player on the house scene”.

Paul ran two studios in the 1990′s before joining State of Bengal to tour China and India in 2001. Freelancing as a technology educator and as a programmer specializing in drums to Coldcut, Asian Dub Foundation and Juno Reactor, he now performs live percussion and technology with Dr Das and Real World recording artists Dub Colossus. Paul runs a studio in London, where he recorded last year’s album by Bengali folk musician Paban Das Baul. Paul works with disability groups and is a provocative sound-artist, raising the roof at Currys and mashing up the entire Beatles catalogue. DJing on the Internet since 1995, Paul’s own Ramjac Radio streams 24 hours a day from www.ramjac.co.uk

Workshops about memory, soundtracks and identity can be booked during the exhibition – contact us for more details.