‘Taking the Streets – Global Protest’ features photographs and video from Egypt and the UK, and marks the 10th death anniversary this year of Carlo Giuliani, killed by police at a G8 demonstration in Genoa. Reflecting on the political power of documentary photography and international movements, ‘Taking the Streets – Global Protest’ informs and inspires. Curated by Poulomi Desai.

The overall theme of this exhibition is power – the contestation of power in zones of conflict, the power of words and ideas, the power of friendship, the power of love, powerful forces of nature, and the power of the photographic medium to help document and transmit the energy communicated by other forms of power.

Jess Hurd has witnessed momentous and astonishing events in the social history of the post-millennial world. The video loops exhibited at Usurp Gallery create a conversation between images whose self-evident similarities speak ultimately not so much to each other, but instead directly to ourselves. These images pay tribute not only to the recent past, as depicted by the literal events that they document, but, as testament to the true power of documentary photography as a genuinely creative (and therefore artistic) medium, they also pay tribute to the futures these images may help inspire us to create. In terms of debate about the relationship between documentary and fine-art photography, and in terms of debate about the relationship between art and life, since politics is the art of life, documentary photography is political because of (not despite) being a “pure” artistic medium, and the creativity this art-form expresses is the desire of people everywhere to take back power and to assume control of their own lives.

Jess’s photographs not only document the recent historic past, but also depict future possibilities, in the epic tale of unfinished business referred to as human life. Last, but absolutely not least, the framed photographs hung in Usurp Gallery spin-out from the more tightly-themed video loops, exploring themes that reflect the broadest spectrum of human colours reflected by this photographer’s extraordinary life.

Jess Hurd works with a broad range of campaigning grassroots organisations on social issues – the revolution in Egypt, the Bolivarian revolution in Venezuela, the Zapatistas in Mexico and urban social movements in Brazil, India, China and Africa. Her images and photo-essays are used by newspapers, magazines, trade union journals, NGO’s and movements of social change through her library ‘Report Digital’. As a passionate advocate of press freedom, she is one of the founders of the ‘I’m a Photographer Not a Terrorist’ campaign, a founder and organiser of Photo-Forum, Chair of the London Photographers’ Branch of the National Union of Journalists, a member of the International Federation of Journalists, and the British Press Photographers Association.  www.jesshurd.com 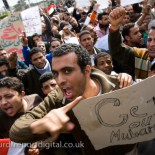 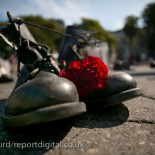 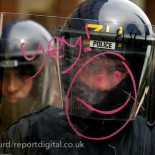 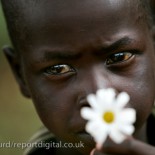 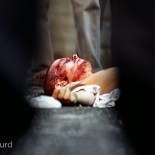