“The Origin of Painting” is a large and highly interactive and enjoyable experimental painting exhibit, created by the electronic music and art project, Disinformation. It was inspired by a performance in 1996 by Hayley Newman titled “Shot in the Dark”. Curated by Poulomi Desai.

Originally shown (under a different title) at The Hayward Gallery in 2000, this exhibit is a sound and light installation that enables visitors to photograph their own life-size shadows, to a soundtrack of live (and surprisingly musical) electromagnetic noise. “The Origin of Painting” also enables gallery and workshop visitors to draw with light directly onto the surface of the painting – producing graffiti, abstracts, portraits etc which are literally incandescent. The exhibit references the mythological origin of painting in the tracing of a lover’s portrait around the shadow they project in lamp light onto a wall. “The Origin of Painting” was described as “actively thrilling” by The Financial Times, and as “visually stunning” and “daunting yet engaging” by The Metro. Sci-fi author Jeff Noon wrote that “people are fascinated by this work”, while The Guardian wrote that “Disinformation combine scientific nous with poetic lyricism to create some of the most beautiful installations around”. The Metro described Disinformation as “the black-ops unit of the avant garde”

“People are fascinated by this work – it brings a shiver, a sudden recognition of death, as though we have seen or heard our own ghost”. Jeff Noon, The Independent

Finally the exhibition also includes “Fire in the Eye” – a series of exuberant and wildly colourful and energetic camera-less photographs, created by “painting” with 35,000 volt live electric discharge. 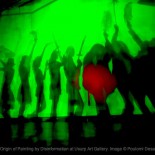 Video from The Origin of Painting workshop at the Usurp Gallery.