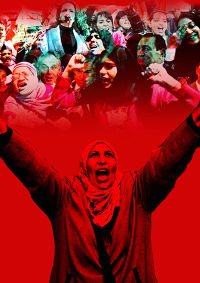 Mama Quilla presents The Singing Stones by Kay Adshead.
Music composition by Najma Akhtar (Usurp Associate Artist)
“In 2011, all over the Arab world, women took to the streets to protest and bring about change. Briefly celebrated, then derided, and finally ignored and denied, their amazing stories remain untold. Until now. The Singing Stones is a triad of short plays, each offering a poetic, fearless and sometimes funny exploration of women and the Arab revolutions. From the heroines of Tahrir Square to the female fighting forces defending the borders of Kurdistan, from the women who snitched on Gaddafi to a band of quarrelling artists struggling to invent a future female revolutionary icon. Was the Arab Spring the greatest missed opportunity of the 21st century?”