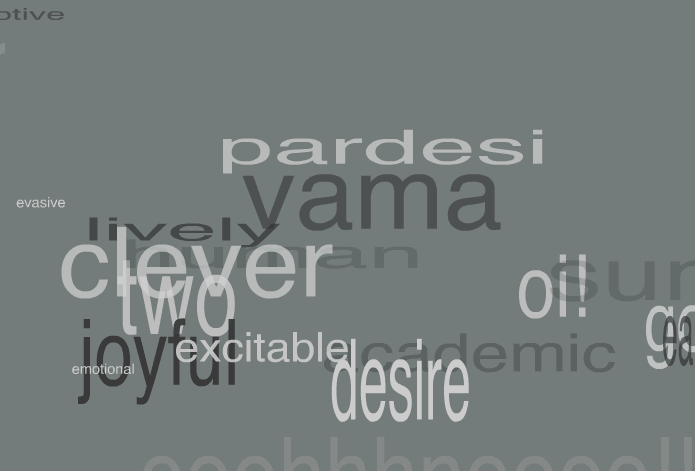 “Cacophony” – A 16 channel acousmatic, experimental, soundscape installation, with live randomly generating code, live feeds, acoustic illusions. In a 3000 sq ft, blacked out space, over 150 voices created a spatial play of sound illusions through a range of languages, dialects, accents, pitch and timbre suggesting at and questioning fixed notions of political and cultural identities. This immersive, transmogrifying installation led the listener on a unique intimate journey through the space, sometimes with poetic, gentle whispers, barely heard and misheard, literally near their ears, and at times creating a cacophony of competing voices wrapped in acoustic hallucinations ‘pleading to be heard’. The piece was created as a site specific installation, with improvisations, performances, workshops and acoustic experiments over a period of a year in collaboration with black communities.

Installation concept and recordings by Poulomi Desai and exhibited at the Mead Gallery, Warwick Arts Centre in February 1999 – 2000 and is an early example of an artist working with sound, random code and voices for a large-scale installation. This exhibition and subsequent web project interpretation was commissioned by The Mead Gallery and Moti Roti, and was part of the exhibition “Fresh Masala”.

Adaptation for the web by Simon Underwood.