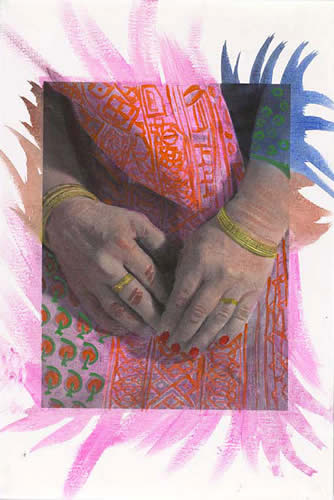 Usurp is proud to have organised an exhibition of digital portraits by local people in Harrow Middlesex which Platform for Arts (now called Art on the Underground)  made into 72 posters displayed at North Harrow Station.

The works were inspired by imagery from Poulomi Desai’s book and exhibition Red Threads which explored personal and visual identity.

Desai encouraged the participants to imagine what it would be like to change their identity. They experimented with costume, disguise, facial and bodily expression and recorded their transformations through photography. Using pastel and paint, they made patterns and decorative detail on some of the photographs to add a further layer to the new identities they were creating. Support was given for people dealing with mental health issues and the project developed well being and confidence. The results are a range of self portraits that offer an intriguing, playful and visually dynamic representation of Harrow’s diverse community.

The exhibition and workshops at Fovea Gallery were funded by Usurp, Arts Council of England, and Awards for All.

Red Threads was launched by the Deputy Mayor of Harrow Councillor Jean Lammiman in an events attended by the participants and artist Poulomi Desai on June 5th 2006. 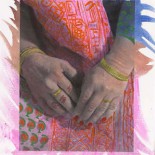 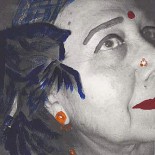